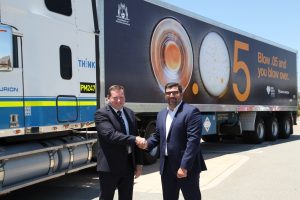 Centurion will help drive road safety messages to regional Western Australia as part of a strategic partnership with the Road Safety Commission.

A number of Centurion’s hard-sided fridge trailers, measuring more than 13 metres in length and two and a half meters in height, will become ‘mobile bill boards’ carrying a range of messages aimed at improving the behaviours of drivers in regional Western Australia.

The first trailers to be branded will carry strong anti drink driving messages.

Two of the first four trailers will service Centurion’s North West route that includes Karratha, Port Hedland, Broome and Kununurra, while the other two will service Kalgoorlie. Drink driving has been identified as a significant road safety problem in both of those regions.

The idea to brand the trailers is in recognition of regional Western Australia’s poor road safety record and the difficulty of communicating road safety messages to people living and travelling to the regions.

Centurion vehicles travel more than 40 million kilometres each year, providing essential goods to a number of industries and regions, predominantly in Western Australia.

Centurion Chief Executive Justin Cardaci said the organisation was proud to be part of the Government’s new road safety campaign.

“We are a business very much focused on the safety of our people, the people we deal with and the communities we operate in. So, carrying messages on our trailers with the aim of keeping all road users safe is a great fit with us.

“As a business that services the regions we recognise the regional road toll is an issue in the State and we are committed to playing our part in trying to positively impact this.

“If we can help save the life of even one person then we will have been doing our bit.”

Mr Cardaci said Centurion had a zero tolerance approach to alcohol across its workforce so his message to drivers was simple.

“If you are drinking, then don’t even think about getting behind the wheel and stay off the roads,” Mr Cardaci concluded. 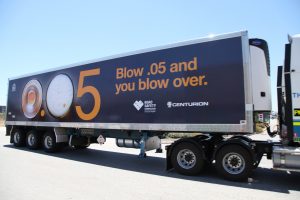