Local Member for the Pilbara, Brendon Grylls, and Executive Chairman of the CFC Group, the parent company of Centurion, Philip Cardaci, officially opened the facility at a breakfast event on 13 November.

The company, which first started delivering to Karratha in 1968, has a long history of servicing both the businesses and people of the City.

The company was founded by brothers Frank and Carl Cardaci in the late 1960’s after they purchased a solitary truck. The first load they delivered was to Karratha the same year.

Nearly 50 years later Centurion has grown from a one truck company into the full logistics solution provider it is today with the City of Karratha remaining central to its future growth plans.

Centurion now provides transport, logistics, supply base and warehousing capabilities in the region.

According to Centurion Executive General Manager Justin Cardaci, the history of the company and Karratha are inextricably linked.

“Karratha has been part of this company from the start. We’ve been involved in every major infrastructure project in the area.

“Over the years we’ve transported critical infrastructure for the City and partnered with companies that construct and then operate the vast projects that underpin the local economy.”

“Whether it be equipment or parts for multi-billion dollar projects, or consumer goods the likely hood is that it will have arrived here via one of Centurions trucks or refrigerated units.”

Mr Cardaci said the new facility would help Centurion service the businesses and people of the city as it grows in the years to come.

“We now have the capability to better service our local customers by improved throughput and turnaround at the Depot.

“Basically as soon as something arrives we can turn it around quicker and get it delivered to its end destination in a shorter time frame.”

Mr Cardaci said that building relationships with local businesses and listening to them no matter how big or small they may be was a key ingredient for the company’s growth.

“We hope we can continue to offer value locally and the opening of this facility demonstrates our continued commitment to the City of Karratha. 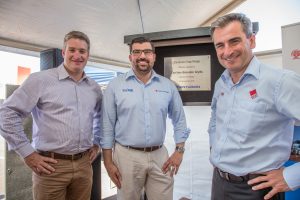