Centurion has been announced as the winner of the ‘Best Solution of a WHS Risk’ category in the 2018 National Safety Awards of Excellence held by the National Safety Council of Australia in Sydney in October. Centurion was one of only two Western Australian winners.

The accolade was presented to Centurion for developing a safer and more efficient OTR tyre trailer that significantly reduces the risk to loaders and members of the public. Restraining arms on the trailers are operated remotely by the drivers ensuring the potential crush zone is clear at all times and reducing the requirement for manual restraining.

A video demonstrating the unique remote control loading and unloading process which makes our trailers the safest in the business can be seen below.

The presentation of the National Safety Award follows the announcement in August that Centurion had been recognised by Woolworth’s as its large Carrier of the Year for 2018 –  a highly prestigious award which is presented to a company that has delivered an outstanding performance in safety, compliance and service. Centurion was praised for its safety and its commitment to servicing its customers especially during the cyclones and floods in the North West in February this year. To find out more about the award and Centurion’s partnership with Woolworths’ click here. 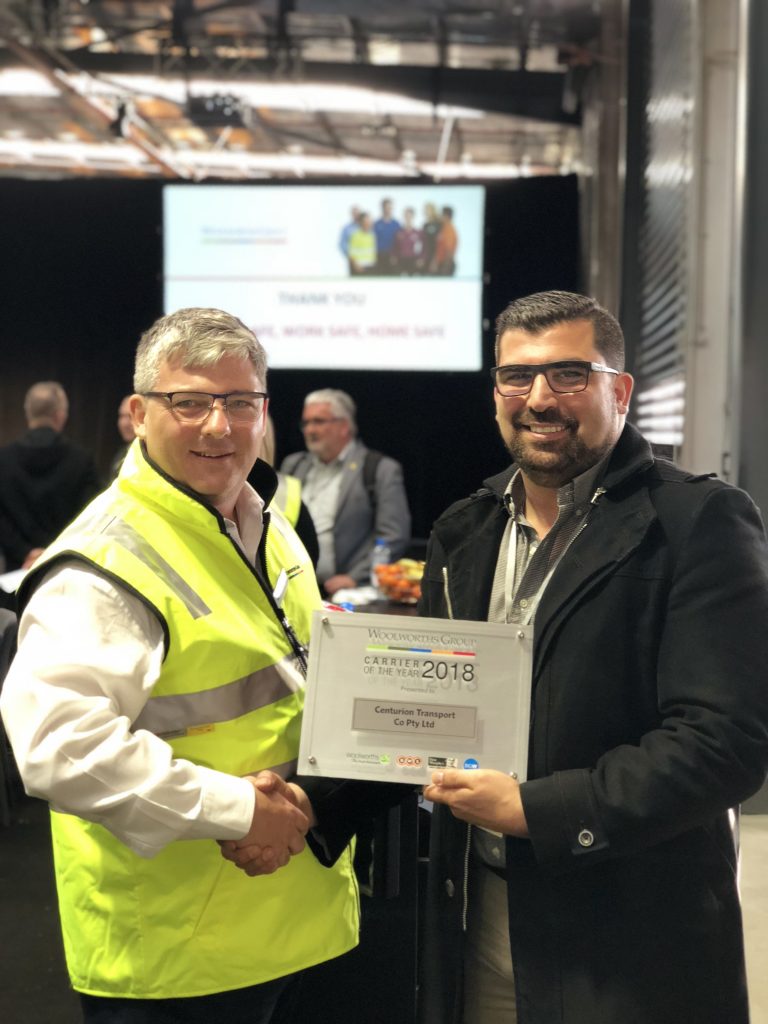 Woolworths’ Head of Contracts and Commercial Rob Agnew with Justin Cardaci at the awards presentation.

Centurion CEO Justin Cardaci said he was honoured to win both awards and that it was a reflection of the business’ focus on safety and innovation.

“This National Safety Award recognises the work our teams put into improving safety everyday and to be awarded this only a month after being announced as Woolworths’ Large Carrier of the Year for 2018 shows that across all areas we are heading in the right direction,” he said.

The National Safety Awards of Excellence are Australia’s longest running independent safety awards, recognising outstanding Work Health and Safety initiatives. Now in their 26th year, the awards celebrate organisations and people that actively promote workplace health, safety and wellbeing to continuously improve business performance. Keynote speaker at this year’s event, Professor Nikki Ellis, also gave a special mention of Centurion’s road safety campaign to make caravanners and road users more aware of how to behave and what to expect when interacting with road trains. The campaign was a finalist in the ‘Best Communication of a Safety Message’ category.